Navigate this page to learn more about the undergraduate neuroscience experience!

Contact us at neurodug@brown.edu with any questions or comments.

Welcome to the Neuro DUG (Departmental Undergraduate Group) website! This page is a resource for undergraduates at Brown who are interested in neuroscience. Read about available courses, professors in the department, brain scientists in the area, what people do with a neuro degree, and more!

Every semester, the DUG receives university funding to foster a sense of community within the undergrad population - for concentrators and non-concentrators alike. To stay up-to-date with DUG events, fill out this form or email us at neurodug@brown.edu to join the mailing list! 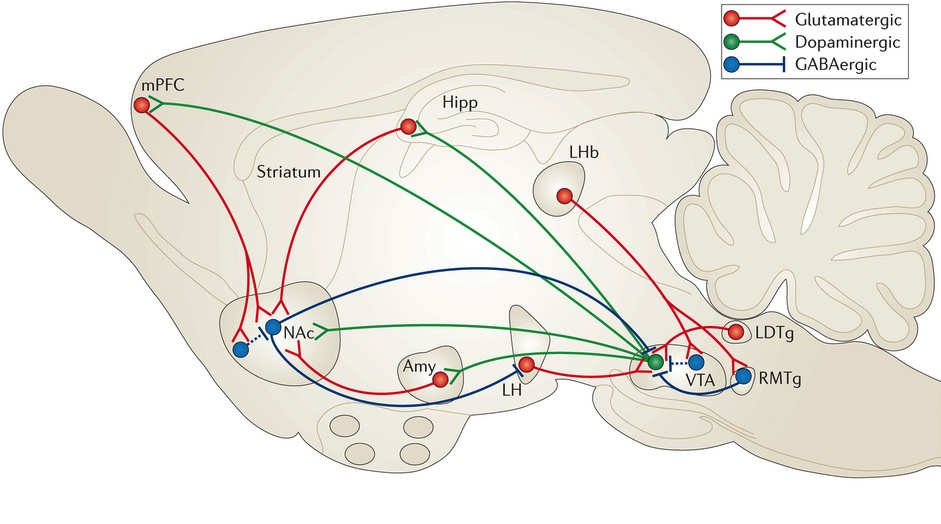 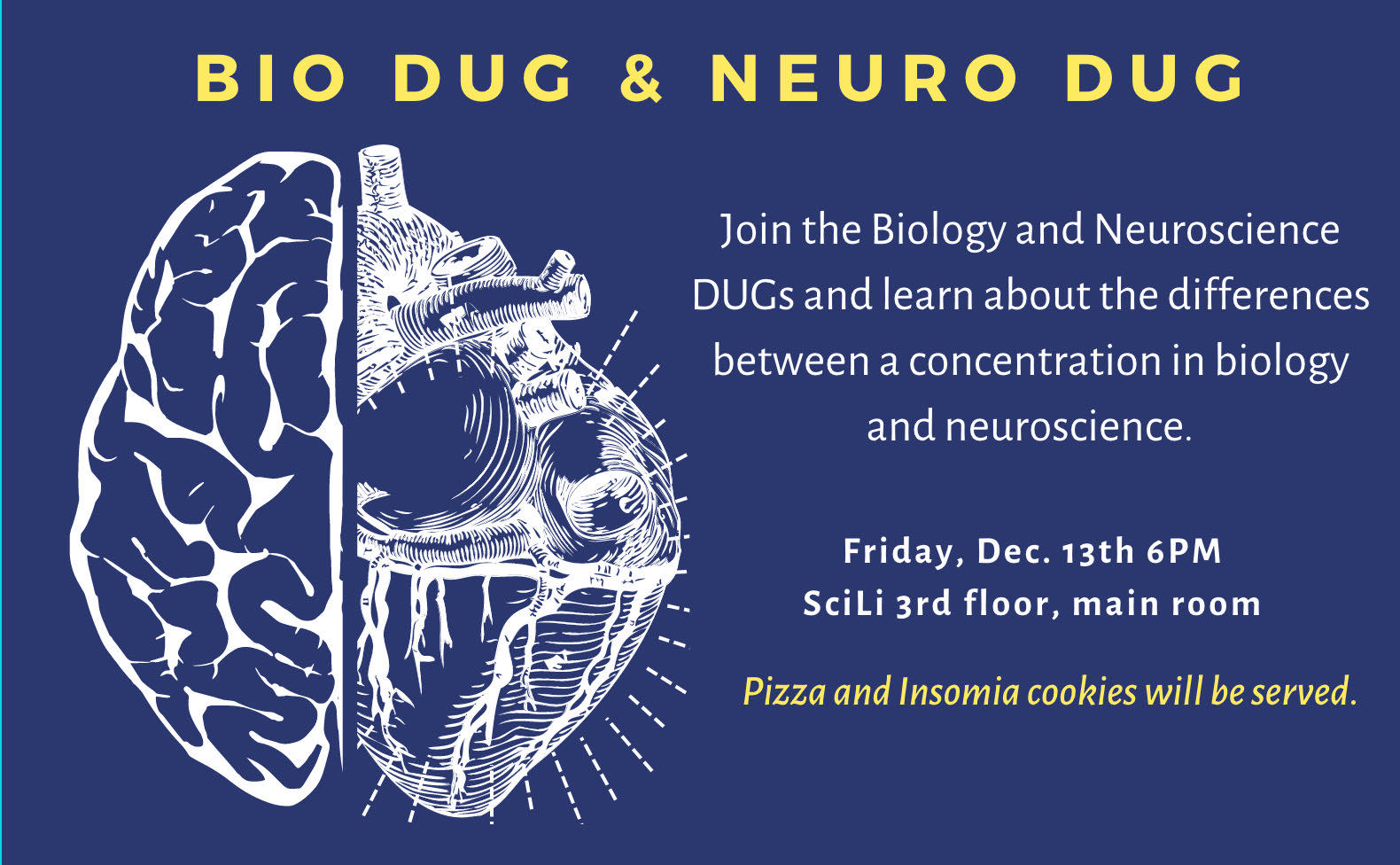 “After graduating from Brown with a Sc.B. in neuroscience, I started medical school at Yale School of Medicine. For students set on a career in medicine, the neuroscience department offers some particularly advantageous opportunities. Personally, the neuro department enabled me to refine skills in research and teaching (which medical schools love!) in addition to providing me with a solid core of scientific knowledge. For my honors thesis, I worked with Professor Gilad Barnea engineering a novel molecular system to study neuronal receptor activation patterns in circadian rhythms. I was also a teaching assistant for Neuro 10 for two years. During medical school I have worked on several research projects in neurosurgery, orthopedic surgery, and otolaryngology. I am currently in my third-year clinical rotations, and this coming year I am actually taking a year off of medical school for a research fellowship, studying salivary cancer and how it invades nerves. The nervous system is intimately tied to practically every organ system in some way, so no matter which field of medicine I ultimately pursue, I know I will find myself using knowledge and skill sets I developed as a neuroscience concentrator at Brown. #BrownNeuro4Lyfe.”

“My name is David Stein, and I graduated with Neuroscience Honors in 2013. After completing my thesis work on a neurobiological pathway implicated in autism, I decided to continue that research for another year. To be more specific, I studied an endosomal sodium/proton exchanger, a protein linked to a severe form of autism known as Christianson Syndrome (CS). Most of my work involved classifying the exchanger's neuronal distribution and its several interacting proteins within the nervous system. In addition to benchwork, I also helped organize the world's first conference for CS patients, families, foundation benefactors, and researchers in June 2013. The work has been very rewarding, demonstrating the important intersection of research and patient care. I will be attending medical school in the fall of 2014, and I am eager to apply my academic and investigative knowledge of neuroscience to my professional training. I have also worked on cooking skills since graduating, being a genuine foodie.”

“After taking both Neuro 1 and Intro to CogSci my freshman year, it became very clear to me that neuro was the way to go. I fell in love with research in Barry Connors' Lab where I investigated the microcircuitry of interneurons in the superficial layers of the prefrontal cortex for my thesis. While at Brown, I took advantage of the flexibility of the Neuroscience concentration (and Brown in general), and was able to also follow my interests in architecture and design. I had a pretty good feeling that I wanted to go to grad school, stay in academia and continue studying neuroscience. My plan was to take a year off from science and see if with distance I still felt so passionate. But I couldn't stay away and this plan was quickly foiled when I was offered a job as a lab tech in a lab studying ALS at Columbia. Since my research at Brown was focused on electrophysiology and circuitry, this research, grounded in molecular genetics, was initially completely outside my comfort zone. I'm currently helping to characterize the disease phenotype in various mouse models of ALS developed by my lab. Although I ignored it while at Brown, I always had this idea that I wanted to pursue an MD/PhD. Getting more research experience, both in terms of research field and understanding of academia, has given me the perspective I needed to decide to apply to MD/PhD programs. I graduated without taking any of the pre-med classes outside the concentration requirements and have been slowly taking the rest of the courses I need while working and I plan to apply next summer. Despite the not-so occasional-frustration of taking a second semester of general chemistry with freshman, I wouldn't have done it any other way.”

“After graduating with an Sc.B. in Neuroscience in 2013, I was completely lost as to what to do with my life. To be fair, I was completely lost before graduating, but upon receiving my diploma it felt a little more disorienting. I couldn’t decide between academia, medicine, or simply leaving the field and heading into industry. Furthermore, I had really gotten into computer science in my last few years of undergrad and wanted to keep building things. To give myself a year's reprieve and some experience in academia, I decided to remain at Brown to get my Sc.M. Working in a neuroscience lab, I get experience with almost the entire stack of neuroscience: human studies, mouse models, genotyping, vascular studies, computational modeling, and so much more. Now that I’m (almost) done with my year-long master’s program, I’m more lost than ever. But at least I now have more experience in the field and can make a (slightly) more informed decision on where to go next. And I’ll have a master’s degree.”

“I graduated from Brown in 2013 with an Sc.B. in Neuroscience, having completed my thesis in Barry Connors lab studying synaptic responses to high-frequency stimulation in mouse brain slices. I loved studying neuro and really enjoyed the benchwork I did in Professor Connor's lab, but in the course of my four years at Brown I got very involved in writing and performing comedy, and by graduation I had decided that that was what I wanted to pursue as my career. I moved out to Los Angeles where I live now and got involved in a theatre called the Upright Citizens Brigade Theatre as a writer. People sometimes say that I should find a way to combine my interests in comedy and in neuroscience and frankly, I find that a pretty tough thing to do. However, my education in neuroscience definitely informs the way I write, with lots of pre-writing and preparation, the same kind of work I might do before a big neuro exam. And hey, what's the harm in learning a lot about a super cool topic even if it is not directly related to the field you end up in? Learning rocks.”